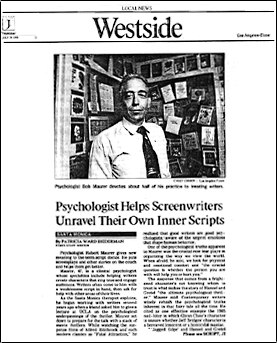 Psychologist Robert Maurer gives new meaning to the term script doctor. He puts screenplays and other stories on the couch and helps them get better.

Maurer, 47, is a clinical psychologist whose specialties include helping writers create characters that ring true and engage audiences. Writers often come to him with a troublesome script in hand, then ask for help with other areas of their lives.

As the Santa Monica therapist explains, he began working with writers several years ago when a friend asked him to give a lecture at UCLA on the psychological underpinnings of the thriller. Maurer sat down to prepare for the talk with a stack of movie thrillers. While watching the suspense films of Alfred Hitchcock and such modem classics as "Fatal Attraction." he realized that good writers are good psychologists, aware of the urgent emotions that shape human behavior.

One of the psychological truths apparent to Maurer was the crucial role fear plays in organizing the way we view the world. When afraid, he said, we look for physical and emotional comfort and "the crucial question is whether the person you are with will help you or hurt you."

The suspense that comes from a frightened character's not knowing whom to trust is what makes the story of Hansel and Gretel "the ultimate psychological thriller," Maurer said. Contemporary writers wisely rehash the psychological truths inherent in that fairy tale all the time. He cited as one effective example the 1985 nail-biter in which Glenn Close's character is unsure whether Jeff Bridges' character is a bereaved innocent or a homicidal maniac.

"'Jagged Edge' and Hansel and Gretel are the same story," Maurer said.

In his classes on storytelling at UCLA Extension and elsewhere, Maurer tells his students about current research on perception and motivation. Typically Maurer doesn't talk about character arcs or use other industry jargon to explain how a changing character can mesmerize an audience. But he does talk about something called the drama triangle, conceived by psychotherapist Claude Steiner. In Steiner's view, human conflict typically involves a persecutor, a victim and a rescuer. Maurer gives the example of the alcoholic husband who persecutes his wife (the victim), who nonetheless rescues him by helping him to bed.

What makes this triangle so useful to writers, Maurer said, is that relationships are constantly changing. The morning after, the alcoholic may become, not the persecutor, but the victim of an angry wife. These shifting relationships can be the source of drama that has the ring of psychological truth, Maurer said. He gives the example of the real-life drama of Anita Hill's testimony during the confirmation hearings of Justice Clarence Thomas. "We were riveted because we were trying to figure out who was the victim and who was the persecutor."

Maurer has a highly respectable day job. He is director of behavioral sciences for the family practice residency program at Santa Monica Hospital Medical Center. He is also on the medical faculty at UCLA.

But for years, the Brooklyn-born psychologist has combined his professional interests with a passion for the theater by counseling drama and dance companies here and in England. His longest running association has been with the local cast of "Tamara," which has turned to Maurer to defuse tensions among the actors. According to those involved in the production, scene stealing and other disruptive antics decreased dramatically after he helped the cast find ways to talk more candidly and positively with each other.

In the last few years, his involvement with writers and their problems has grown. Now about half of his small private practice is devoted to writers, he said.

Occasionally Maurer is called upon to treat such traditional literary maladies as writer's block. He says he is sometimes able to unblock writers with hypnosis and exercises that allow them to regain their curiosity. But other problems are more common in his practice. One widespread issue for the TV and movie writers he sees, he said, is "How do you stay passionate and clear about what you are doing when the external reward system is so erratic?"'

Maurer tries to teach his writers to embrace fear, instead of being paralyzed by it, and to reach out to others for comfort. He also tries to immunize them against the rejection that is an almost daily feature of their professional lives.

"There's no such thing as rejection," he tells them. He gives the example of the man who asks a woman if she'll have dinner with him Saturday night and she answering "I'd rather floss." Where does the pain come from in that encounter? What really hurts, the psychologist argues, is not the rejection itself. The real killer is the tape that plays in the rejectee's head telling him what a jerk he is. Maurer urges clients to replace the put-down message with one in which they congratulate themselves for their courage in asking for the date--or making the pitch to the studio head.

Sometimes success, not failure, prompts writers to seek Maurer out. "Some of these people are fine until fame and fortune hits," he said. He has seen successful writers suddenly start abusing spouses, squandering their money, dumping longtime associates (especially agents), abusing drugs and alcohol and, perhaps worst of all, stop writing.

"One didn't pick up a pen for three years before she finally came to me," he said.

But people can be taught to stop sabotaging themselves, Maurer said. He tries to get his clients excited about the writing process itself and less concerned about the tangible rewards of making it. Ironically, he said, success often comes as soon as it no longer seems all important. He also encourages his clients to find more sources of pleasure in their everyday lives. "The last myth among artists is that your pain is necessary to your creativity."

Fischer says his post-Maurer stories have more "emotional reverberations." And as he has become surer of the emotional underpinnings of his characters, Fischer said, his work has become less wordy. The writer explained that one of his fortes is "very snappy dialogue between overly clever men and women. . . . One of the systemic effects of my work with Maurer is a quieter confidence that a simple exchange of dialogue is enough, that characters don't need to be constantly clever. That's an enormous change for me."

Denise Halma, of West Hollywood, also praises the script doctor. Halma, who recently finished writing the sequel to "Pretty Woman" for Disney, said Maurer has helped her view setbacks not as failures, but as illuminations. And when she is stuck in her writing, she said, she often reminds herself of such Maurer- isms as "you don't know a character until you know what he or she is afraid of."

Maurer is working on several nonfiction projects of his own, including a book on the skills of successful people. But, so far, working with Hollywood writers hasn't unleased his own inner screenwriter, although, Maurer said, "my awe and admiration and respect for them has grown considerably."